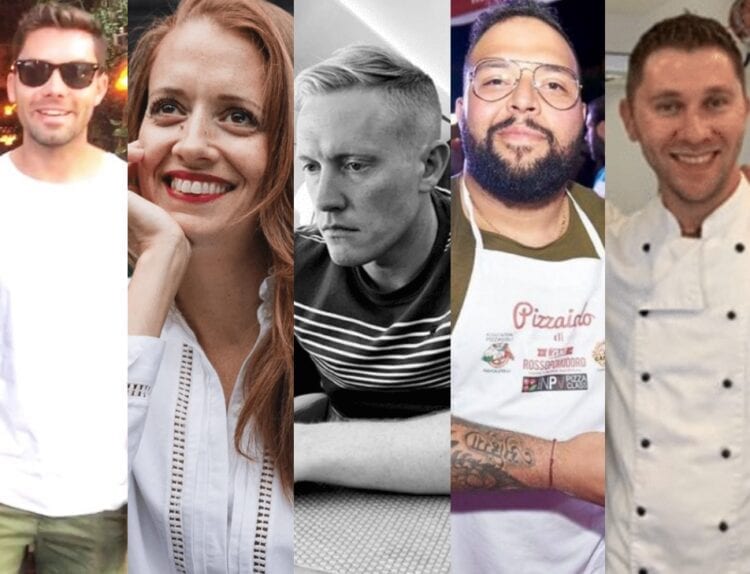 We recently caught up with 5 superyacht chefs who interviewed over the past Med season. If you missed it, read it here.

This week we catch up with another group of yacht chefs, each with their own exciting developments and future plans for 2020. Read on!

We spoke to Head Chef Micail Swindells earlier this year as a joint interview with his sous chef Dom Horsey. Both chefs are staying on for another season on M/Y GO, but for now- they are both enjoying holidays.

Dom is in Iceland, where he celebrated his birthday, and Micail is managing to keep himself busy even on his down time. He will be going a stage at The Greenhouse, a 2 Michelin star restaurant in London. Keep an eye on his Instagram in the coming season to see what tips and tricks he picks up from there to wow his charter guests with.

There are also early whispers of an upcoming cookbook from Micail, which will encompass his yacht chef career and his stages. Hopefully we can let you know more about that when it comes out. ED: There seems to be a few yacht chefs recently mentioning they will have cook books coming out soon- exciting times ahead!

And there appears to be a single spot left on Micail’s 5 day advanced skills, techniques, plating and presentation with mymuybueno cookery school in Palma De Mallorca, Spain. If you wish to book the last spot, check out their website now, and secure your place.

Stephanie Soret warned us that her update was going to be “boring”, but it was anything but! Here’s an ex yacht chef who is well on her way to creating a cookie empire while also holding down a private chef gig AND adjusting back to life on land.

We have promoted Le Cookie Shop a few times over on our IG page because we just love it so much! Stephanie has been busy creating this little online business in the UK focusing on homemade vegan and gluten free cookies. She has also expanded into granola.

I have learnt a lot about becoming an entrepreneur. The tech side was the most challenging for me ( creating a website when I barely know how to use a laptop was HARD) but I am proud of what I managed to create even though it is not perfect. As chefs, we always aim for perfection. So I had to learn to be less of a perfectionist for this side of the business! On the other hand, work – as my real work- as been very busy so combining both is tough.

It’s a good thing she is specalising in Vegan cookies, as the family she cooks for as a private chef have just gone vegan! If any chefs out there can suggest some great “vegan cheese” recipes, please get in touch!

As exciting as it is having strangers buying her cookies on the internet, Stephanie does admit starting a business has been a massive learning curve. There has been big differences between expectations vs reality. She has learnt to be patient and to stop being too trusting.

Unfortunatly, at one point, she learnt that the hard way and lost about £500. But what Stephanie has learnt the most, is that we are all capable of following a dream or an idea, all we need to do is START. She suggests to start at your own pace but get into it!!

In January, she plans to take some downtime (finally!) and head to Bali.

One of our favourite intrepid chefs travelling the globe right now is Nick Walden. We first caught up with him just after he completed his sushi training course in Tokyo earlier this year.

Since then, he has gone from being based in the Med to working on a yacht in South East Asia. Nick is thoroughly enjoying the dramatic contrast in produce that is available locally in Asia and is challenging himself to only use what is fresh around the areas we are based.

This means he gets to duck and dive into local markets in Indonesia, Thailand and Singapore, and geting a real buzz from discovering new weird and wonderful ingredients to experiment with.

I am constantly on the move and still trying new foods. I found myself sipping away on a tea made from bird vomit, a bit of a delicacy in China apparently. Food is one big adventure to me. It constantly pushes me to connect with people and take me to new places. From visiting markets in Italy, dining at Micheline star restaurants in Hungary then wine tasting in Central Otago wine region of my home country, New Zealand.

It sounds like Nick will be hanging out in South East Asia for awhile yet. He is lucky to be based on a yacht that has an exciting itinerary and he’s really looking forward to tasting his way through Thailand, Cambodia, and the Philippines. In between the long hours of the occasional guest trip, you will find Nick sitting somewhere devouring a bowl of noodles or a spicy curry for breakfast.

Nick is still working on his blog Oversea.co.nz check it out if you haven’t already.

It is a great honour to write freely about my food experiences and unique career path as a yacht chef, and to post them on a wall for people to read. This is where I share my food story, I will be sharing with you things that I have learnt along the way, tricks I have discovered by making many mistakes, and tips I have picked up from friends and experiences.

Catching up with Sergio Marichales at the end of the Med season was fun. It was great to hear how being featured on The Superyacht Chef website impacted his career the past season.

Sergio had an interesting season, starting with a shipyard period stateside and his first visit to New York. He managed to have a short break in Barcelona before heading to Marbella and Palma De Mallorca for some work as a chef in a private villa. The guests included royalty! But, as always, confidentiality is key SHHhhhhh 😉

Because there was plenty of freelance work over the season, Sergio clocked up over 40 flights in 2019 with a month still to go!

After Palma he completed some more temp work in France, before networking with an old colleague. This lead to a wonderful job working land based in Staniel cay in the Exumas, Bahamas. Sergio now heads up the catering department and will be based there for the next year or so.

In the meantime, he plans to learn a new skill away from the galley to diversify his knowledge. He has already made a start on a mini bucketlist of goals having learnt to snowboard, cook Arab food and learnt a bit of Russian over the past season. We can’t wait to see what new skills he will pick up in 2020!

Chef Gjorgi was one of the first chefs we spoke earlier this year. He’s since left his old boat and has switched to a busy 50m charter yacht, M/Y Broadwater, which is one of the busiest charter boats in the industry. He had 3 months off work (hopefully enjoying time with family and friends!) and is just coming back to work now with a busy Caribbean season ahead.

After finishing the Med season on M/Y Broadwater he spent some time attending courses with some great Michelin star chefs like Daniel Clifford  From Midsummerhouse and Adam Handling @frogbyah.

Chef Gjorgi was also able to learn some new techniques from the amazing chefs at Tickets Barcelona, who gave him some great insight into why they are the best tapas bar with their amazing creations.

Like many of the yacht chefs we chat to, attending the Sushi Academy sushi course in Tokyo is high on the agenda for 2020. Gjorgi hopes to to attend this and also working at a restaurnt in London. Neither are confirmed yet, but keep an eye on his Instagram page, I’m sure it will be obvious when either plan is underway!